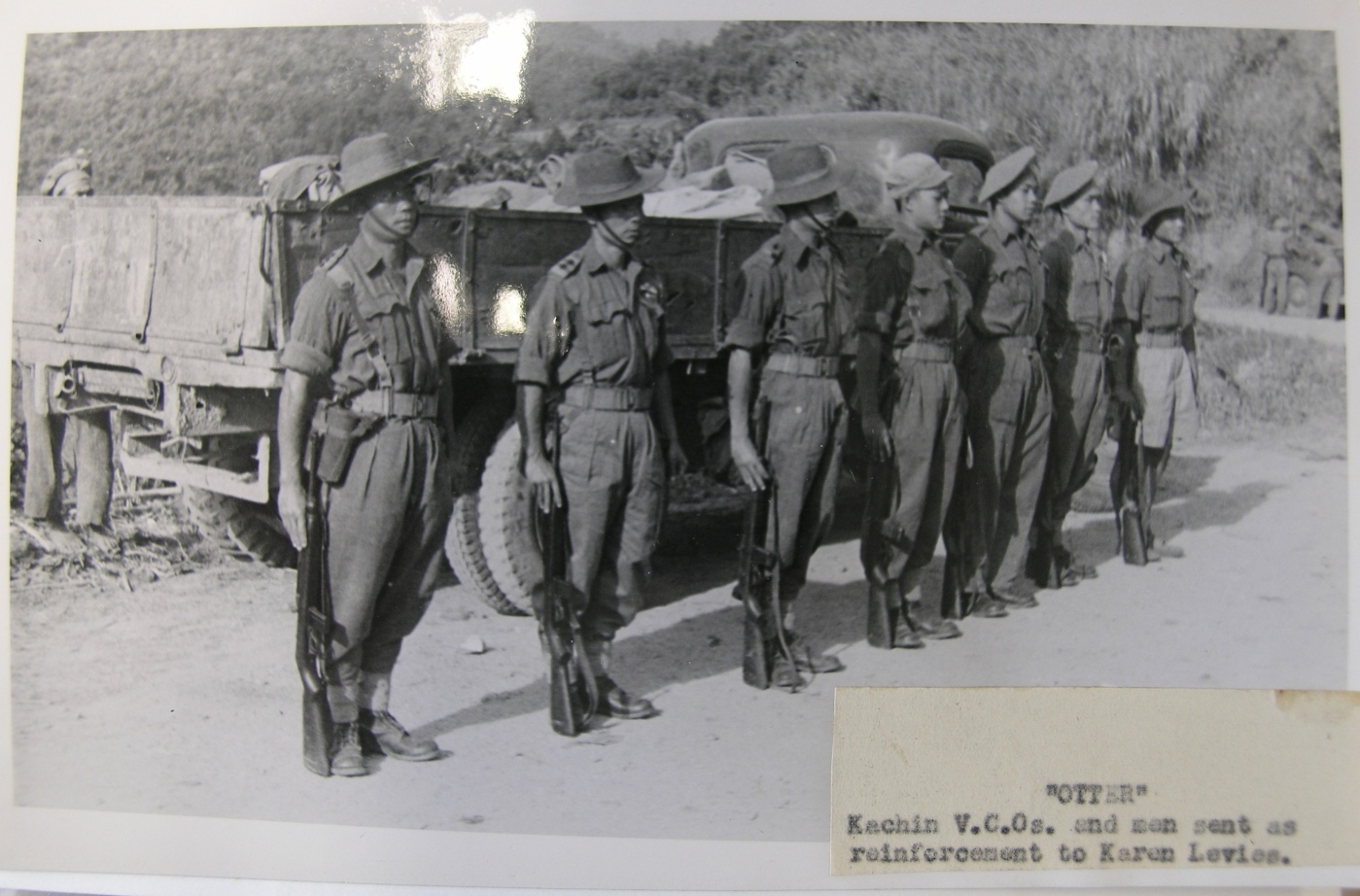 Henry Noel Cochrane Stevenson was given the go-ahead by Reginald Dorman Smith, the Governor of Burma, to raise the various peoples of Burma as stay behind guerrillas in 1941. This was quite remarkable because, across Southeast Asia, the various colonial governors had proved obstructive and dismissive of such a scheme. Since May 1941, when the Oriental Mission had set up Headquarters in Singapore, the leader of the SOE mission, Valentine St. John Killery, had faced military and colonial officials who simply did not want to entertain the idea of raising indigenous peoples for secret work – except in Burma and Hong Kong. Sir Reginald Dorman Smith, despite the opposition of the Commander in Chief Far East, was able and willing to do what he thought was necessary for the defence of the colony he was responsible for. The irony is, there were few who thought that the various European empires wouldn’t be able to see off any Japanese aggression, and fewer still who expected Burma to even be invaded by the Japanese.

Of course, when war finally started in December 1941, the Japanese proved their mettle and within six months occupied territory spanning from the Gilbert Islands in the East to the Indo-Burmese border in the West, and from the Russian border with China in the North, to the island of Timor-Leste in the South. To reclaim these territories, guerrillas were used across the many islands and countries, but arguably Burma is where they achieved – with SOE at least – the most significant results. Made a Lt.Col., Stevenson went to take charge of the Kachins of Northern Burma himself, while other British officers worked with Chins and Karen in other border areas of the country. Formed into the Kachin Levies by SOE, the Army very quickly took over the both the Kachin and Chin Levies because they were employed at or through the frontline; SOE’s remit was to operate in areas which the regular army could not reach. Accordingly, in February 1943, Operation Dilwyn was launched, one of SOE’s first missions after the Japanese had run the British out of Burma.

Operation Dilwyn was initially led by Kachin officers, and although British officers also served, when the operation was wound up after the Japanese surrender, Kachin officers were still leading various part of it. In fact, the mission in Kachinland was SOE/Force 136’s longest running operation in Burma, having a continuous presence in the field from February 1943 until September 1945. For almost the entirety of this time, the personnel of Dilwyn were behind the lines. Apart from the Japanese and the jungle, they faced considerable difficulties from their Allies, the Chinese and the Americans. The Chinese made several attempts to gain territory and redraw borders, as well as stripping Kachin villages bare as their soldiers and guerrillas lived off the land. Many Kachin joined the American Office of Strategic Services, the OSS, which was the American equivalent of SOE / Force 136. The rivalry between Force 136 and OSS regarding the Kachin became quite intense, as the two clandestine services sparred over where the other could operate and the recruitment of personnel.

By August 1945, the Kachin had acquitted themselves well serving both OSS and SOE, but there were some major concerns as the war in Burma came to a close. Lt.Col. ‘Bing’ Crosby was in overall command of Operation Dilwyn during 1945. There were five teams, codenamed Bear, Squirrel, Gazelle, Monkey and Badger. Three of these, Squirrel, Gazelle, Monkey, were led by Kachin officers, and most of the NCOs were Kachin too, see Operations and Personnel List. The following transcript provides the insight of Captain Khun Nawng, officer commanding Squirrel:

In the Burma campaign the Kachins have done much more than their share. It is most unfortunate that most of the part played by the Kachins is with the O.S.S. It is now being purposely ignored by the Army and other British Authorities. At one time O.S.S. employed nearly a Div. of Kachins, many of them trained soldiers. Round about April and May we [Force 136] were still employing about 500 Kachins. We fight in the Shan country, but both we and the Americans found that we could never bring the Shans into real battles. In June O.S.S. came down with 3 Bn. of Kachins from Kuthkai and sort of helped us to clear the whole of Shan State down to Loilem and Namsang.

We are supposed to be guerillas, but I think we have done much more than any of the troops in N.C.A.C. area. We have always been in behind the enemy lines and fought against heavy odds and made the enemy think we are a big army. Somehow or other we always manage to bluff the Japs and frighten them away. The name of the Kachins has become a legend in the Shan States, and most notorious among the Japs. Every time the Japs withdrew, the Japs tell the locals, “The Kachins are coming – they are very bad people, they always hide in the jungle and you can never hit them back. They throw away their arms and come after you with dahs.”

Our boys are just marvellous. Any time they take on odds 1 – 10 against them happily. They have done wonderful things and behave like crazy beings in a fight. One instance, a section of 8 men under Hav. Ladi Naw gave 80 Japs the most thorough beating for 2 days. Lots of our N.C.O’s deserve V.C’s or D.S.M’s.

Now I wish to find out from B.C.S [Force 136’s Burma Country Section] just what the Government of Burma is going to do for the Kachins for the great part they have played in this war. Are we going to be forgotten once the war is over? We never get any word of appreciation from the Army or the British Government.

We look up to you and the B.C.S. to do every possible thing you can to put in a strong word for the Kachins and to boost up the achievement of the Kachins to the higher-ups, so that we can get fair recognition for services rendered. Unless we can do a certain amount of propaganda now, everything will be forgotten once the war is over.

Our N.C.O.’s are getting a bit restless. They have found out that lots of commissions are going cheap in the new units of the Army being formed for the Kachins – the Kachin Rifle and Frontier Force.

Please do something to assist them.

To find out what happened next you might want to read last month’s post: Rewarding and Rebuilding: Force 136 Recognition of Sacrifice and Heroism Otherwise, the short answer is that nationalism in Burma, a new UK government and new attitudes to decolonisation, as well as post-war realties for Britain, determined another path. To some extent, both Cummings and Capt. Khun Nawng have been proved correct: the services and sacrifices of the Kachin in Burma during the Second World War have largely been forgotten.

Entry for Capt. Laphai Khun Nawng from The Men of SOE Burma:

Captain Laphai Hkun (also on file as Khun) Nawng: Born on 15 January 1907 in the Bhamo District of Burma, Captain Nawng earned a BSc and was Kachin Inspector of Schools before the war.  Granted a commission so that he had the appropriate status for his operational role, Captain Nawng was parachuted into Burma on 28 December 1944 on Operation Dilwyn, in charge of group Squirrel.  He was exfiltrated on 22 September 1945, nearly nine months later.

As his recommendation for an MC describes, Nawng’s team missed their DZ and were put in immediate danger, prompting another officer to write ‘his conduct could hardly have been bettered by any of our officers’ – this after he had been suspected of being a Japanese agent and described as ‘not very promising in appearance’.

Nawng was allowed to keep his temporary rank of Captain, this recommendation stating that he was a ‘[t]horoughly competent oficer in every way and an excellent leader of men.’