As part of my Easter break, I travelled up to Northumberland this year (2017).  Whilst there, I was told by the friends we stayed with that a little town called Craster sold the best kippers in probably the whole world.  I wouldn’t know because by the time we got there the shop was shut, but the name of the town – Craster – made me think of Captain Craster, an officer who served with the Special Operations Executive in France and (of course) in Burma.

The Second World War is never far away, even in a little fishing village; this little memorial is attached to invasion defences beside Craster harbour: 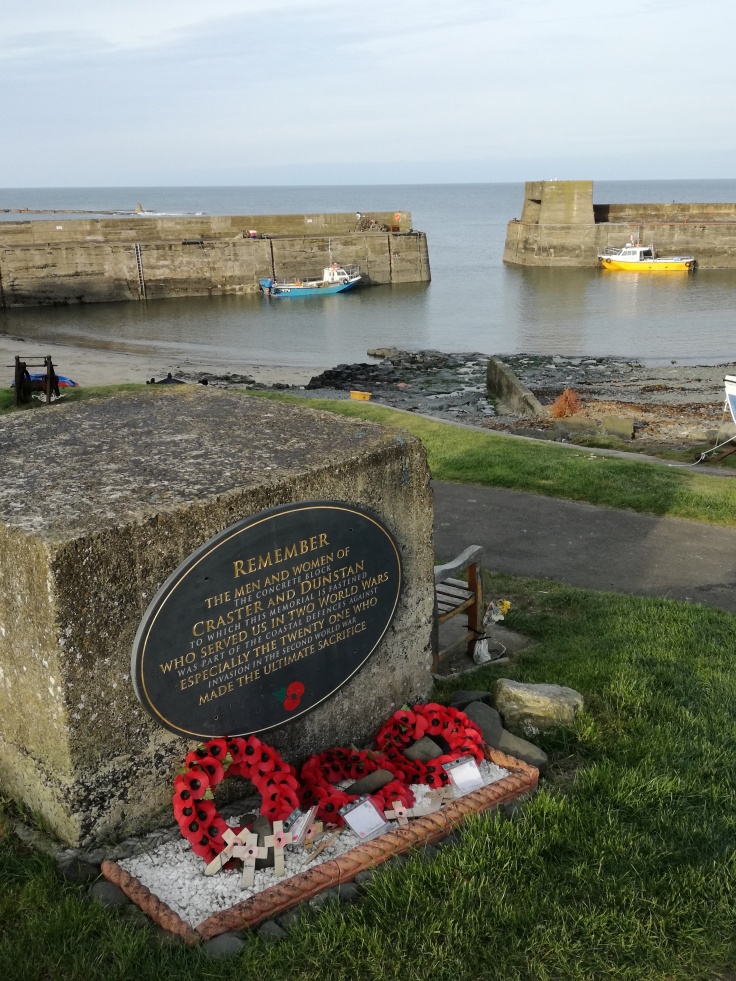 If you want to visit Dunstanburgh Castle, you park at Craster and walk along the coast.  You could do this National Trust trail.

The next day, we went to the Roman ruins/fort at Arbeia, which now almost, but certainly once-upon-a time, overlooks the Tyne Estuary at Tynemouth.  At Arbeia, we were lucky enough to have a ‘Roman Doctor’ on duty.  He was a fantastic young historian, who apparently studied Politics, but runs his own educational company with his mate, the ‘Roman Cook’.  In conversation, he mentioned that there was once a King in Northumberland called Oswin.

Now I had a King called Oswin, and a town called Craster.  Captain Craster’s first name was Oswin…

Saint Oswin was King of Deira from 644 until 651 when he was murdered by order of his sister’s husband, King Oswy.  King Oswin’s remains were lost over the years, until a monk called Edmund apparently had a vision in which he found them.  Captain Oswin Craster’s middle name was Edmund.  After Edmund the monk ‘found’ Saint Oswin’s remains and relics, they were kept in Tynemouth Priory.

His second address is given as Longwall Cottage, Oxford.  Right next to Longwall Cottage is St. Edmund Hall, thought to be the ‘oldest surviving academic society to house and educate undergraduates in any university’ according to Oxford University.  It would take a bit more digging to find out if St. Edmund of Abingdon was connected to Northumberland in any way; it looks like he wasn’t.

Captain Craster read History at New College, Oxford, before the war.  To see his brief war biography, visit The Men of SOE Burma, on this website, but to finish up here…

…Captain Craster was parachuted into France as part of Jedburgh team Stanley in August 1944.  The friends who we stayed with ‘up north’ have a dog.  His name is Stanley.