The shortage of equipment for the Southeast Asian theatre of operations during the Second World War are well known.  From the supply of worn out Battle of Britain aircraft to a lack of landing craft; from tanks to parachutes to Sten ammunition; from flashlight bulbs to batteries; British and Empire troops had to make do, and so it was for the Special Operations Executive (SOE) as well.

The frustration of those in charge of SOE is palpable in many of the documents.  Colin Mackenzie, in overall command of what became known as Force 136, seems to have had an expert touch in maintaining etiquette and decorum in his correspondence whilst ensuring that his obvious annoyance and need for action were made apparent.  This talent appears once again in the documents concerned with establishing SOE’s para naval section.

On the 6 January 1944, Mackenzie wrote about the need for SOE to be saved ‘from serious embarrassment’.  The previous July, approval had been obtained for the procurement of three Type B Fairmile Motor Launches (ML), numbered 438, 474 and 477.  SOE had gone ahead and recruited and appointed the personnel required to man the boats, but the MLs were on operational duties with the Inshore Flotilla based in Chittagong, and the commander refused to release them.  Mackenzie was moved to request ‘as an acceptable alternative’ three new MLs from the Indian construction yards, and ‘an early and definite reply’ so that his new and still boat-less personnel could be gainfully employed.

In the meantime, it appears that feelers were put out to the American Office of Strategic Services (OSS).  In a letter dated 11 January 1944, Lt.Col. Richard Heppner demonstrated that Mackenzie was not the only one schooled in the art of politely penned ‘bugger off’ communications.  Heppner explained how the OSS Maritime Unit (MU) was an ‘integral part of OSS’, and that the ‘MU is not a transport service but an operational unit’ of highly trained US Navy and Coastguard personnel.  At the same time as giving a clear message that the MU was untouchable, Heppner wrote that the OSS ‘is anxious to share its resources at all times including its boats and it will be glad to furnish to the projected transport fleet a suitable boat without crew, as soon as one can be procured and shipped.’

By 18 January 1944, it was agreed that the Burma Navy would supply the three Fairmile MLs, but that they would need to be modified for Special Operations once they were taken from inshore operations at the end of March or beginning of April.  It was also agreed that they would be manned by Burma Navy personnel.  The same document indicates that Heppner had a spare ML which was powered by three Hall Scott engines ‘as used in Fairmile ‘B’s’, which had a maximum speed of 19 knots and a range of 600 to 1400 miles.  Heppner had agreed to allocate this boat to the Burma Auxiliary Force.

Getting on for seven months after the arrangements made in July 1943, there seemed to be some progress.  Getting the MLs was one thing, but victualling them at sea was another.  Accordingly, on 10 February 1944, a request was made by SOE for a Special Depot Ship, which was needed by 1 May.  The type of ship required was ‘similar to the S.S. “Sir Harvey Adamson” or Eastern Fleet Coastal Force’s Depot Ship the S.S. “Blinjoe”.’

The SS Blinjoe was a Dutch ship named after the city in the Dutch East Indies.  Discreet enquiries were made by Sir John Nicholson, Director of Sea Transport, GHQ(I), into the availability of another two Dutch ships in Sri Lanka, the SS Plancius and SS Merak.  The Dutch Admiral in charge was unwilling to part with these vessels; they were at that time being used for ‘picnic parties’ for the WRENS in Colombo.  Eventually, the Blinjoe became the ‘mothership’ for SOE’s Burma Auxiliary Fleet: 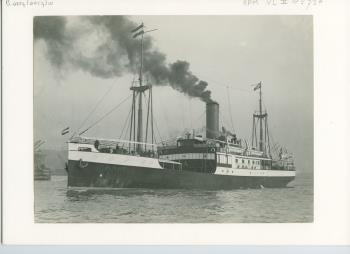 On 2 March, a ‘Most Secret’ communication from SOE was sent to the Flag Officer Commanding the Royal Indian Navy regarding the modifications that would be necessary to ensure that the depot ship could function.  Among those sixteen needs were collapsible davits to accommodate two motor surf boats, power winches fitted forward and aft, and additional fresh water tanks.  In reply, Eastern Fleet HQ pointed out that the surf boats would have to be made or shipped from the UK.  Due to the ‘congested state of the boat-building capacity in India during the next few months’, it was proposed that the order should go to the UK.  The power winches were ‘not obtainable in India’, and this matter should be taken up with Major Gardiner (in charge of SOE’s Burma Country Section).  Lastly, regarding the water, clarification was needed on the quantity of fresh water required and then a message to the Admiralty would be sent to specify where those tanks should be fitted.

In the meantime, SOE had been able to execute landings and exfiltration of agents on the Arakanese coast while all these arrangements for a para naval force were going on.  On 8 December 1943, Tin Shwe, codename Lancelot, was put ashore, with the task of contacting Burmese nationalists in Rangoon and finding out if they would revolt against the Japanese.  He was successfully picked up on 12 February 1944, with two extra personnel, one of who was his brand new wife!  The ML that picked up Tin Shwe was compromised by a Japanese boat which was duly sunk, and seven Burmese crew were picked up out of the water.  These men were recruited by the Secret Intelligence Service (SIS) and were deployed in the Arakan, later crossing paths with SOE again.

By the 29 April, however, it is apparent that SOE was still awaiting a decision on which ship they would be allocated, and were worried that the delivery would be too late for the modifications to be made for training before the monsoon.  At this time, the battles of Imphal and Kohima were being fought, and the reconquest of Burma seemed a long way off, yet in a year’s time, the invasion forces of Operation Dracula would be at sea making for their landing zones to take Rangoon.  In less time than it had taken thus far to organise SOE’s Burma para naval section, the fortunes of  war would be reversed and General Slim’s army would be in Rangoon.