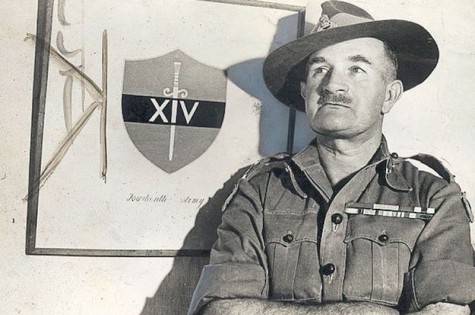 Before leaving, Cumming had been told ‘that G.O.C. -in-C. Fourteenth Army was dissatisfied with Force 136.’  In Slim’s view, Force 136 ‘showed no adequate return’ for the resources it had at its disposal, and that it ‘showed up in a poor light’ when compared to the American Office of Strategic Services (OSS).  Consequently, Slim apparently recommended that ‘Force 136 ceased to operate in BURMA’.   Slim’s dissatisfaction was not new.  He had complained about a lack of intelligence in June and September of 1944 to 12 Army Group and Southeast Asia Command (SEAC) respectively.  In Defeat into Victory, Slim again lamented the lack of intelligence he had to cope with as Army Commander:

‘I had throughout been conscious that, improving as our intelligence was since 1942, it was far from being as complete or accurate as that in other theatres.  We never made up for the lack of methodically collected intelligence or the intelligence organization which should have been available to us when the war began.’

What Slim didn’t know was that most of the intelligence that the OSS had came from SOE’s Operation Dilwyn, which had been launched in March 1943.  By 1944, it was well established, with a network of prominent Kachin including Major Shan Lone and Captain Zau June organising the northern area of Burma.  The OSS, according to SOE files, had built their network on SOE’s goodwill, which included relinquishing Lazum Tang to help the Americans.  Furthermore, according to Cumming, the intelligence that OSS was generating came from acting ‘in a “V” Force role’.  In other words, OSS intelligence only cam from the immediate front, and not from teams penetrated far behind the lines.

A.  Observation of the following:

B.  Interference with these lines of communication when ordered by C.O.C.-in-C.

D.  Consideration of the possibility of raising the KARENS when Fourteenth Army front was approaching their country.

Force 136 then produced an ‘OUTLINE PLAN FOR BURMA OPERATIONS JANUARY TO APRIL 1945’ which explicitly aimed to ‘assist the advance of Allied Land Forces’.  At this stage, the expectation was to insert eleven Patrol or Special Groups, seventeen Jedburgh teams, and ten Burmese resistance agents.  The projected number of guerrillas that would be raised was 5,500.  In the end, as The Special Operations Executive in Burma reveals, these numbers were far surpassed.

To keep these men and their recruits alive and fighting, a total of 18,574 weapons were issued in the field between January and August 1945, with 5,746,403 rounds of ammunition, plus 36,876 grenades.  Approximately 885 tons was flown into Burma from over 1000 RAF sorties.  Was there an ‘adequate return’, one of Slim’s main complaints during 1944?  Did Force 136 ‘show up in a poor light’ with this commitment?  Here’s what Japanese Generals Kimura and Honda had to say:

(a)  We had difficulties in both waterway and highway transportation with small forces;

(c)  Had to send out forces to meet those British para forces therefore, was no time for training and construction of trenches.  Menace to preparation for next operation.

(d) Captured armes [sic] from British Para forces were used as outfit for our troops.

At the same time there were many dacoity and had to increase troops not only to the front line but various places in the area under Japanese occupation.

(a)  C-in-C Divisional Commander assigned area to each force to keep law and order as well as to annihilate Br Para forces’ activities.  But they were scattered all over and their cooperation with one another was excellent therefore we obtained very little results.

(c)  Tried our best to keep law and order in our territory so that the troops at the front can fight without disturbances.

(d) Tried to get as much information regarding Br Para Troops and planned to intercept their objects but did not succeed.

A note at the end of this report states that this Japanese appreciation ‘only covers our operations in the Moulmein Area which were on a comparatively small scale.’  Apparently the Japanese were instructed to write an appreciation of the main Operation Character and Nation areas, but that remains a document to be found somewhere in the files, if it was written and survived.  What does exist are some documents written by XIV Army and American units:

I wish that you would pass on to the man in the field our appreciation for the fine work that they have been doing.  That information has been extremely helpful to us and has, as we all know, certainly paid dividends in our campaign against the enemy.

I know their’s is a hard and dangerous work with but few opportunities to learn or know of its overall effects.  In our opinion these effects have been great.

On 3 May, General Slim sent a message to all Force 136 teams in the field:

‘Am more than pleased with the splendid work all parties in the field have already done in killing Japs and passing intelligence. I rpt I call on you for one last all out effortto hit the Jap hard while you still have chance in this final Burma phase.  Good luck to you all.’

It might have been a final phase for Slim, given that Rangoon was in Allied hands, but there were still about 50,000 Japanese in the Karen Hills, and 20,000 on the west bank of the Sittang.  The Force 136 teams still had a lot of fighting to do throughout May, June, July and halfway into August.

On 31 July 1945, a message was sent from 98 Indian Infantry Brigade to HQ 19 Indian Division about Reindeer, one of SOE’s Operation Nation teams in the Pyu area.  In it, Brigadier Charles Jerrard stated that Reindeer intelligence was ‘of the utmost value’ and that without it ‘such successes as we have had would scarcely have been possible.’  In an offensive role, Reindeer dealt with ‘numerous parties of Japanese, large and small’ showing ‘resourcefulness and courage’.  Overall:

‘The assistance afforded by Reindeer to tps under my command has extended over a very wide field and has been of the greatest possible value.’

Now that the Japanese have accepted terms for the surrender of their armies in BURMA and SIAM, I wish to take this opportunity of thanking and congratulating all ranks on the great part which FORCE 136 has played in the final defeat of the enemy in BURMA.  For many months all of us who  have served in 12 and 14 Armies have watched with admiration the skilful manner in which your hazardous operations behind the enemy’s lines have been conducted and we have realised the many difficulties of weather, country and supply which you have had to overcome.  The large number of casualties which you have inflicted on the enemy demonstrates the success of your persistent harassing tactics which undoubtedly hastened his disorganisation and eventual defeat.  Your loyalty, skill and endurance have been an example to all and I hope that it may not be long now before you can return to your homes with justifiable pride in your achievements.

Looking at the map below, it can be seen that most of Slim’s requests (reproduced above) in section A, numbered 1-9, were met by Force 136 teams.  In particular, Bison, reporting Japanese movements in the Mandalay area, receives much approbation in the archives; its commander, Major Hedley wrote about his experiences in Jungle Fighter.

Of the further three sections of Slim’s requests, only ‘C’, severing the phone lines, is something I haven’t found any evidence for.  Regarding ‘B’ and ‘C’, both ‘interference’ with Japanese lines of communication and raising the Karen were very successfully carried out, surpassing all expectations.

A meeting on 30 December 1944 between an Army Commander and an SOE officer managed to alter inaccurate perceptions, come to an agreement, and then cooperate in such a way that an entire campaign benefited from close liaison between conventional and irregular forces.  Thankfully, the two men involved had the qualities of leadership to ensure this happened.