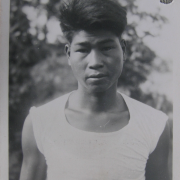 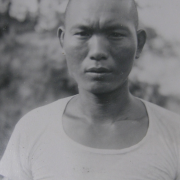 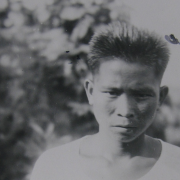 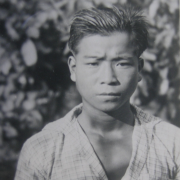 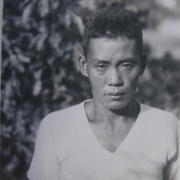 Some of the faces of those who fought with Force 136

The predominant narrative for the Burma campaign is that the so-called ‘martial’ races, the ‘Hill Peoples’, remained loyal and steadfast allies of the British throughout the Second World War.  The Karen, the Chin and the Kachin, most historiography tell us, all fought against the Japanese and awaited the British return.  Their incentive was that Britain would protect them from political control by the Burman majority population.  The Burmans, referred to more widely today as Bamar – so the traditional narrative explains – were anti-colonial nationalists who betrayed Britain and only came to fight on the Allied side once it was obvious that Japan was to be defeated.

History is never such a black and white case.  There are always exceptions, sometimes quite considerable ones, which should make any historian shy of using the words ‘this proves’…

In 1942 there was a Karen movement which was anti-British and pro-Japanese.  It was called the Thompson Po Min Movement, and led by a Karen of that name.  The leadership included Thompson Po Min’s brother, Johnson Po Min, Saw Po Dwe, ‘and an associate of U Saw, the traitor Premier’.   Geographically, the Thompson Po Min Movement was active in the Yado area, which is to the east of Toungoo, and in the Pegu Yomas, which are hills west of Toungoo.  As related in my book, the Thompson Po Min Movement was about ten years old by 1942, and enough of a nuisance, in the opinion of the military and SOE, for the brothers to be arrested.  On the governor’s orders, supported by the Burman Home Minister U Aye, the brothers were released after arrest on two occasions during the first Burma campaign.  The Chief Conservator of Forests in Burma, H.C. Smith, wrote in his November 1942 report that ‘news of their release was received with consternation by loyalists in the Karen Hills.’  Later, in April 1942, Captain Thompson thought that it was Thompson Po Min supporters who had shot at his men as they began their retreat along the Toungoo to Mawchi Road.

A recently declassified personnel file is also instructive in the case of ‘accepted’ loyalties in the Burma theatre.  Captain Lionel Po, a Karen, worked for SOE.  In August 1943, however, it was decided that ‘[o]wing to a tendency to unreliability in matters of security, it has been decided that this officer cannot safely continue to be employed’.  The censors in India had intercepted Captain Po’s letters to his cousin, and their content posed the question of whether or not ‘he was loyal to the Cause [sic] for which we are fighting’.

There were several specific points related to race and status which suggest why Captain Po was disaffected.  In a letter dated 10 August 1943, he wrote about how he was not going to be promoted to Major: ‘I consider they don’t want a black man to be senior.  Am still appealing, but I am afraid this will be the last – it has caused the biggest wound in my heart.’  He then goes on to question if ‘we are fighting for a lost cause’ referring to the war.

In an earlier letter, 16 July 1943, he wrote ‘[t]hese White Monkeys, do not salute us as we are black.  In Rangoon I gave one officer hell for checking one of my men […], who did not salute him.  I said “I don’t see why they should salute you when your men do not salute me”.  He then went on to write about how British people no longer ‘consider Sunday as a Day of Worship but a day of pleasure’ so is it any wonder ‘why God has punished them in this way?’ again referring to the war situation.

He also seemed to be sore that Burmans he knew had been awarded honours, but not any Karen:

‘We don’t carry guns or wear uniform in our work – we are syp (spies) who are shot at dawn if caught – no chance of being a prisoner of war.  It is my luck to be in this work.  Our Heavenly Father will look after me as he has done in the past.  Our work is more dangerous than others, but no V.Cs. D.S.Os. or M.C.s. are forthcoming to us – think of our boys , Ba Tyan of Kogu, Ba Ohn Tin (Mya Pou’s son), Ba Yhat Kyi (Yha Myat Kyi’s nephew) who have already dropped from a parachute in Burma.  No honours for Karen as yet and I am afraid none will come to us in future as we cannot blow our trumpets or know the art of bum sucking.’

These two examples of Karen dissatisfaction  don’t necessarily indicate that there was widespread anti-British sentiment amongst the Karen, being limited as they are to a specific geographical area and one officer respectively.  What this does do, of course, is challenge the broad brush stroke which postulates that being Karen equated to being a loyal servant of empire.  It shows that there was at least some organised resistance to British rule amongst the Karen, thereby ruling out the idea that it was only the majority Burmans who were politicised against empire.

The Chin, like the Karen, are typically portrayed as having been loyal to the British throughout the war.  There were the loyal Chin Battalions in the Burma Rifles, and the Chin Levies who were an irregular force operating on the Indo-Burmese border between 1942 and 1944.   Yet in 1946 a war crimes team was sent into the Chin Hills to investigate collaboration with the Japanese, and there is evidence that a Chin shot a British officer dead while out on the Indian frontier.

In post war Burma, there was much discussion about placing Burman nationalists and their leaders such as Aung San on trial.  Ultimately, this did not happen in the interests of stability and a smooth decolonisation, so it is perhaps not surprising that these investigations in the Chin Hills also came to nothing.

Something that was investigated, probably as thoroughly as it could be, was the death of two British officers who parachuted into Burma with an all-Chin team.  This Force 136 team, codenamed Rat, was led by Major Smyth and Captain Meredith and dropped into Burma in January 1945.  Apart from the two officers, at least two of the Chins were also killed in a succession of Japanese ambushes.  The rest of the party escaped to British lines, and they were interviewed to ascertain what had happened to the officers.  While it seems unlikely that there was any foul play based on the documents, there was evidently room for doubt at the time, possibly stoked by the story of the murdered officer.

Regarding the Burmans, as posts on this website and the Roll of Honour reveal, they were not all anti British, but nor did being anti-Japanese make them pro-British.  Hundreds of Burmans from all over Burma worked with SOE.  Where the media at present would have their readership believe that the Special Operations Executive only worked with the Rohingya in the Arakan/Rakhine region and exploited the divide between Arakanese Buddhists and Arakanese Mohammedans, my post entitled ‘Only Rohingya?’ shows that these reports are misleading.

In central Burma, nationalist Burmans took part in a huge operation codenamed Nation.  This operation consisted of at least 16 teams of Burmans led by British officers fresh from Europe who parachuted into Burma to ensure that Aung San and the Burma National Army (BNA) did not oppose Slim’s army as it advanced to Rangoon.  At the end of March, the BNA came over to the Allies, and by the end of June 1945, it was estimated that approximately 5000 BNA and Anti-Fascist Organisation (AFO) troops were fighting the Japanese with SOE officers in charge of them.  This statistic was made possible because in approximately November 1943, the head of Force 136, Colin Mackenzie, decided that SOE should start using nationalist Burmans whom many other British officials regarded as traitors.  The internal struggle between British officials over the employment of the BNA and AFO was intense, reaching all the way to London:

‘I understand that S.A.C. [Supreme Allied Commander] is somewhat out of favour with the Chiefs of Staff as they consider he has taken too prominent a part in political questions affecting Burma.’

It came close, but Mountbatten won the argument and the BNA and AFO were able to contribute to the war effort.  This has provoked arguments which have raged ever since about whether or not this decision to use nationalist forces saved the British from a fourth Anglo-Burmese war, or is the main cause of the civil war which has continued into the 21st century.

To state an obvious,  war puts people in extraordinary situations, and mostly it’s about survival.

In Burma, there was not only war with its bleak moments and times of triumph, there was colonialism with its internal differences; there were ethnic divisions; divisions within ethnic communities; political differences between Burmese nationalists; strategic tensions and competition for resources between Allies; and a plethora of competing visions of the post war world.  This all contributes to a complicated picture in which the idea of loyalty gets subsumed in the pursuit of survival.  Survival itself took many forms:  survival of self; survival of culture; survival of nationalist leadership; survival of career; survival of empire; all had their enemy.

The broad brush narrative might often paint a picture that we like, or one that we can mostly agree with, but it is the diligent historian’s job to search out the intricacies and reveal them.  I would further suggest that it is the collective duty of all of us to question traditional, all-encompassing narratives in the meantime.