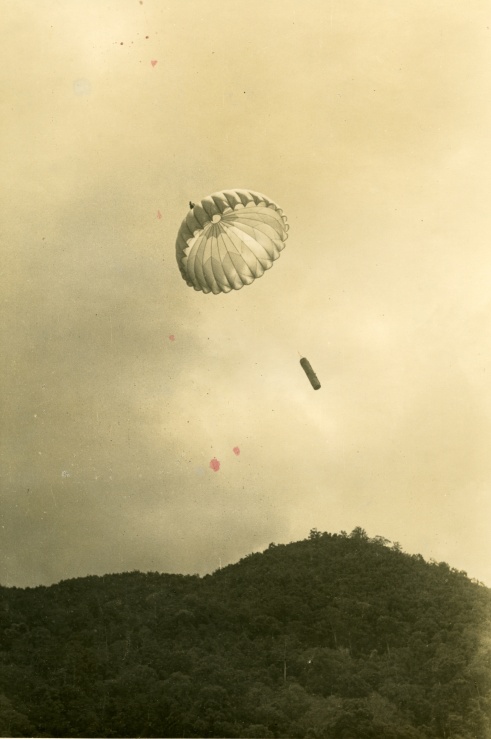 Many of the post-operational reports written by the officers in charge of operations in Burma during 1945 contain quite scathing comments about the supply of their teams.  While they are full of praise for the RAF in stores delivery, something they could see and appreciate, their animosity towards Q section is probably based upon ignorance of the conditions in which Q officers in India had to do their job.

At least two officers complained that Q ‘thought they knew best’; Lt.Col Hood wrote that he felt ‘badly let down’ by ‘Calcutta’.  Meanwhile, Major Neville, after asking for Sten ammo and witnessing the ‘finest exhibition of flying [he had] ever seen’ was disappointed to receive .303 ammunition.  Lt.Col. Howell didn’t understand why arms stopped being dropped and wrote that ‘the major pity of the campaign’ was that if they had been supplied properly, the Japanese would have suffered much more.  Captain Wilson never received the explosives, including grenades, that he asked for and Lt.Col. Peacock only received MMGs six days before the Japanese surrendered.

The situation back in India, regarding Q, seems to have been quite challenging judging by the report written about Force 136 stores at the end of hostilities.  As the SOE operations in support of 14 Army intensified in May 1945, ‘many containers and packages both special and standard were completely ruined by a freak series of pre-monsoon storms.’  The reason behind the storms creating so much damage is perhaps more comprehensible when it is revealed that the stores were still being kept under tarpaulin rather than under a roof.

Even when there were no freak storms, or the monsoon proper, the home of 357 and 358 Special Duty Squadrons at Jessore was ‘extremely humid’.  Apparently, ‘the result of the Bengal sun on metal containers, however well stored, after a night of high humidity was disastrous.’  An example is given of a metal container at Jessore for two weeks under a tarpaulin.  The shotgun it contained had a warped barrel, ‘the whole trigger group so distorted as to be useless and the stock itself cracked.’  The boots it contained were useless also, as the soles had ‘completely separated’.  This container had not been exposed to any rain, just humidity and sun.

Part of the reason behind a lack of grenades being delivered to the field is also explained.  In April, 16,000 ‘Grenades 77 commenced spontaneous combustion […] some 16,000 being or having to be destroyed’.  The Senior Inspecting Ordnance Officer was of the opinion that ‘under the conditions of storage that obtained, the grenades could never be considered safely stored.’  What appears to have been lacking was brick buildings for Q to be stored in: ‘An effective method of storing all types of stores other than in brick buildings, in the climatic conditions that obtain in Bengal has so far as we are aware, still to be found.’

A final problem was theft.  Apparently there was a serious amount of ‘pilferage’ which required the employment of Gurkhas as security, the mounting of a 24 hour guard, and the erection of a seven foot barbed wire fence over a mile long.  Search lights were set up and ‘Calcutta Police were in constant liaison’.  Despite these and other measures, ‘the methods employed by those benefiting from the pilferage were never discovered.  It was the opinion of Security and the Police in Calcutta that an extensive organisation was at work.’  There was some concern that Jessore, ‘as a hot bed of political intrigue and the close proximity of a large I.N.A. [Indian National Army] Camp’ meant that stores were being stolen for future use against the Raj, but the conclusion was that most items stolen were of ‘high black market value’.

That might explain why the officers in the field complained that they didn’t receive any decent whiskey.